It’s been a whole year since we threw a housewarming/New Years Eve party on the farm. What a crazy year it’s been, too!

Just days after we mailed out our holiday cards last year, on December 5th, we found ourselves signing an enormous stack of papers, as we closed on a house after a year of hunting. Talina left for a pre-planned trip to Nicaragua with her school, and two days later, Megan arrived at the new house to pick up the keys. While Talina was away in Nicaragua, Megan and an army of friends and family, including her brother Thaddeus, who came up from California to help, washed and painted, ripped out the carpeting and installed new flooring before Christmas Eve. After Christmas, we moved out of our apartment in Portland and were finished unpacking in time to throw a New Year’s Eve party in our new house.

After the New Year began, Talina headed to Seattle for a two month clinical rotation at University of Washington. While she was away, Megan worked from home, and spent her free time working on the new house, preparing space for a garden, and settling into “farm” life. With Talina home on weekends and help from Megan’s parents (and Weed Wrenches), we attacked a pasture full of scotch broom bushes and the task of rebuilding a luxury chicken coop in the barn.

In March, Megan started to travel regularly to Austin, TX for work, and it was Talina’s turn to be home alone. We brought home baby chicks and raised them in the bathtub (something we’ll probably never do again, the dust was incredible!), then found a few adult chickens, and a rooster, to round out the flock, and by the end of April we had 12 birds and enough daily eggs to swear off store bought eggs for the rest of the year.

For Megan’s birthday in May, we threw a big garden party… as in, everyone helped us build a garden! Friends sorted seeds and hauled loads of compost, and by the end of the weekend, our first 1500 square foot garden was in. Some of Thaddeus’ goats came to join us permanently, making us feel like a real farm. On May 19th, after three years in undergrad and three in graduate school, Talina graduated from Pacific University with a clinical doctorate in Physical Therapy and the Director’s Award. She accepted a job at a geriatric outpatient clinic in McMinnville, a twenty-minute commute from our house, and spent June studying for the national PT board exam, which she passed in early July.

Also in early July, Talina’s father Oscar, sister Khylia, and our niece River came to visit us. We hung out on the farm, went berry picking, split logs, and took River to the Oregon Zoo; it was fun to share our new life with family. With the warmer summer weather came the discovery of fruit trees in the pastures, and the seeds planted in May began to erupt into food! The rest of the summer became a flurry of garden chores, the biggest of which was figuring out how to eat or put away all the food we grew… our freezer and pantry shelves are quite full.

August, September and October passed by in a flash. We harvested hundreds of pounds of food from the garden, and spent some time off-farm dealing with various medical related events.  Reaching the quiet time on the farm, in November and December, has given us some time to regroup and begin to plan for the next tasks. We look forward to the new year, and the continued realization of our dreams. We hope that you too are seeing the realization of your dreams in this year and into the next. We are so thankful to have you in our lives.
Love,

A few photos from our New Years Day walks: 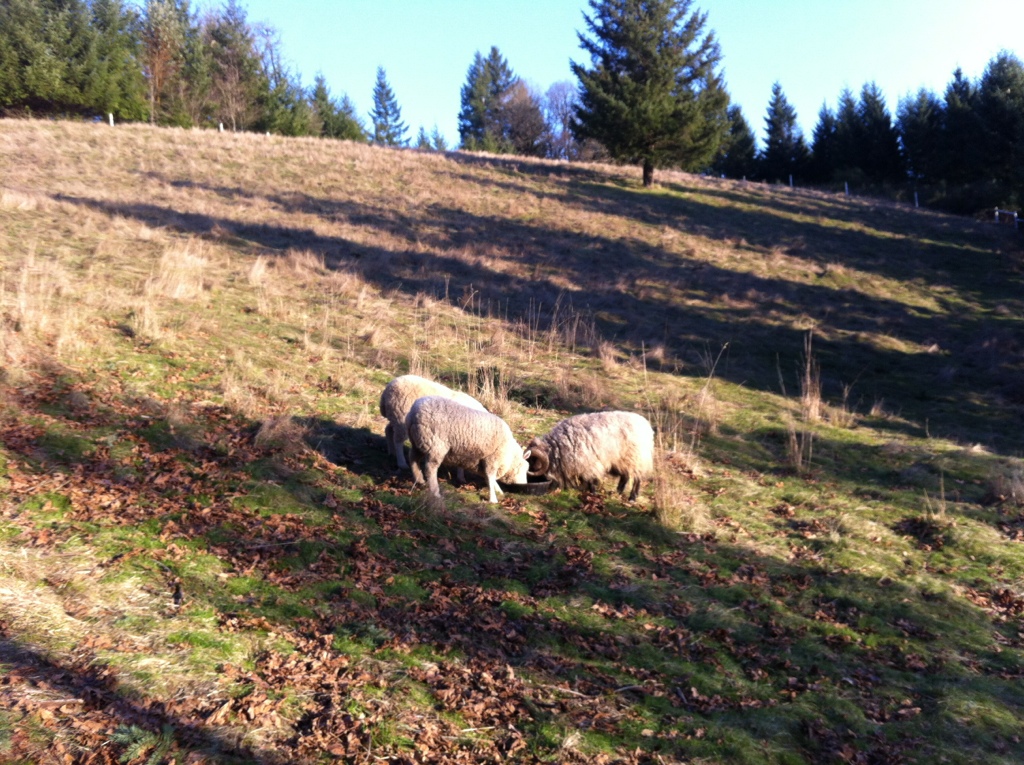 Happy sheep in a frozen pasture 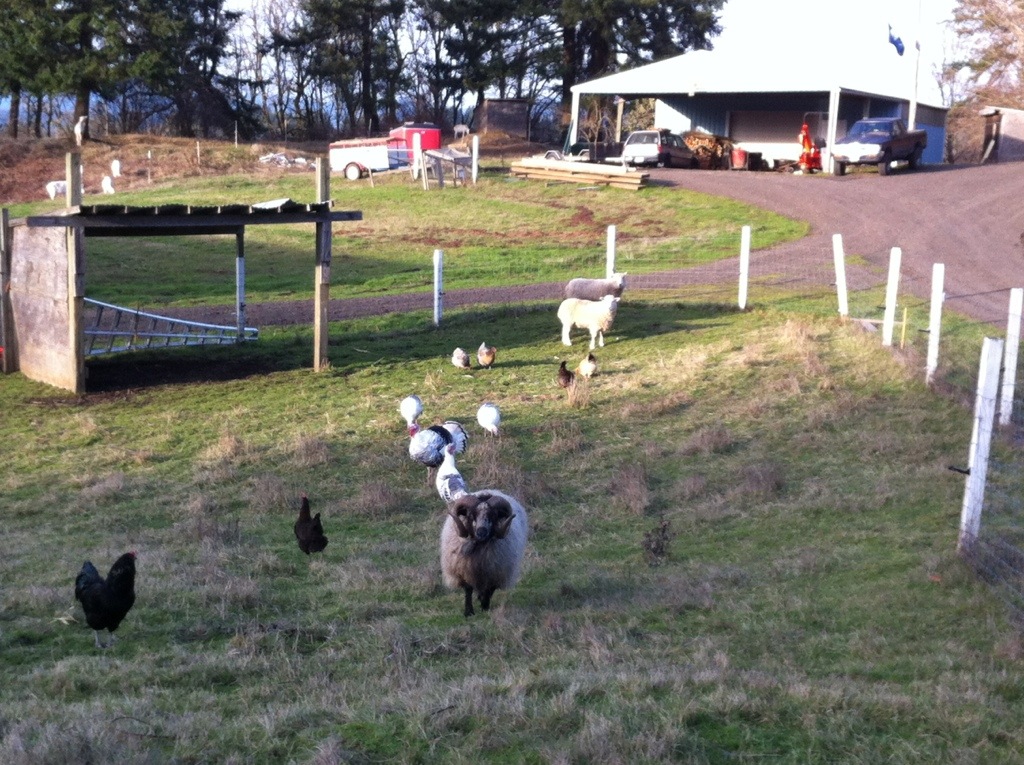 The whole menagerie in one photo: Sheep, Turkeys, Chickens, Goats 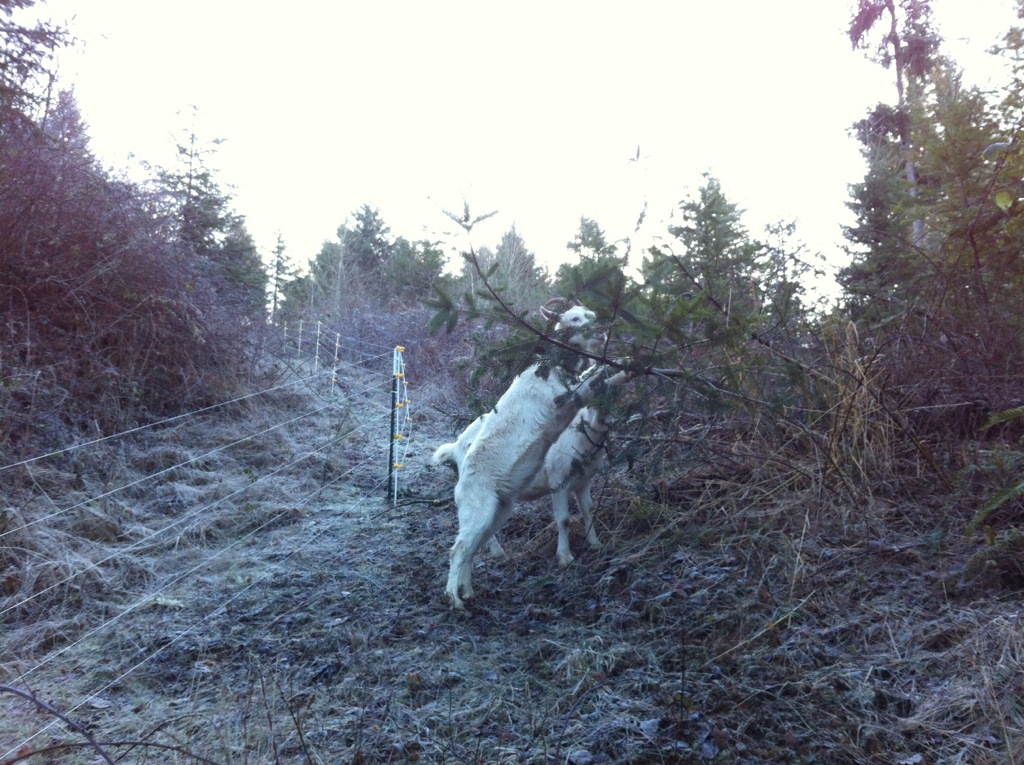